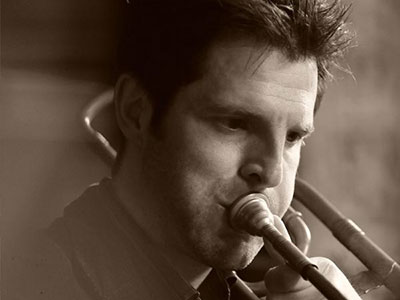 Andy began his musical training as a chorister at Wells Cathedral and later, as a music scholar, studied bass trombone with Alan Hutt at Wells Cathedral School. Andy continued his training at the Royal College of Music, where he won the Fanny Hughes prize for brass. Since leaving the RCM Andy has performed with many of the country’s leading orchestras including the Philharmonia, Royal Philharmonic Orchestra, London Philharmonic Orchestra, London Festival Orchestra, Welsh National Opera and Bournemouth Sinfonietta. In addition to his work in this country Andy regularly performs with the RTE Concert Orchestra, Orquesta Filarmonica de Gran Canaria and Athens Camerata. On the bass sackbut Andy has performed and recorded with many period instrument ensembles including the Orchestra of the Age of Enlightenment, English Baroque Soloists,Gabrieli Consort and Players, Tafelmusik, Academy of Ancient Music, New London Consort, The Sixteen, Amsterdam Baroque Orchestra, King’s Consort and at Shakespeare’s Globe Theatre, London.
We use cookies to ensure that we give you the best experience on our website. If you continue to use this site we will assume that you are happy with it.OkPrivacy policy