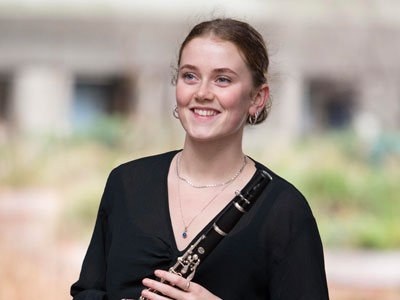 Cara Doyle is a London based clarinetist who is classically trained but enjoys performing an eclectic range of repertoire. She completed her undergraduate studies at the Guildhall School of Music and Drama with a first class Honors degree and Concert Recital Diploma for exceptional performance in her final recital which included Stockhausen’s Der Kleine Harlekin. She is an avid contemporary music specialist with performances including Anders Hilborj’s Duo for clarinet and violin, which was broadcasted for BBC Radio 3 in February 2021, and Donatoni’s BOK with marimba player Richard Benjafield in 2019. In her second year of studies, Cara won the Guildhall clarinet competition and was a finalist of The Needlemakers Woodwind competition in 2020. She held a recital in the Barbican foyer with pianist John Flinders in October 2020 and performed the Françaix trio with violist Matthew Jones and pianist Ke Ma in Milton Court concert hall in July 2021. For the last two years she has been recording and performing with her violin and piano trio, The Kinu trio, playing works by Stravinsky, Bartok and Khachaturian.

In the past year Cara has played with the BBC Symphony Orchestra, Britten Sinfonia, The Riot Ensemble and LSO as well as freelance orchestras. In January 2022 she performed Messiaen’s Quartet for the End of Time at the Barbican in association with the BBC, with a BBC Radio 3 broadcast a month later. She is about to start second year on the Orchestral Artistry Masters course linked with the LSO at GSMD, where she is taught by James Burke, Andrew Webster, Andrew Mariner, Jennifer McLaren and Ausiás Garrigós Morant. Cara is currently a clarinet teacher with Hounslow Music Service as well as private teaching and tutoring on Summer Music courses.