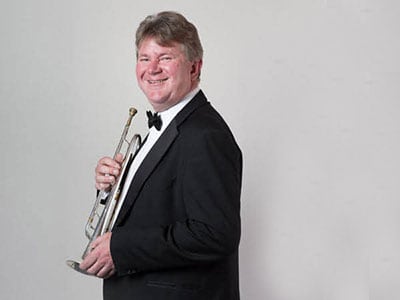 Paul Beniston started playing the cornet at Gillingham Salvation Army. He was a member of the European Community Youth Orchestra from 1983–86, and studied Music at Bristol University and the Royal College of Music (MMus in Performance Studies). Paul was Principal Trumpet at English National Opera from 1989–93 before joining the London Philharmonic Orchestra as Principal Trumpet in 1994. His playing is featured on Karl Jenkins’s The Armed Man, the original Champions League anthem and The Lord of the Rings trilogy, as well as LPO Label recordings of Mahler’s Symphony No. 5 under Jaap van Zweden and Shostakovich’s Concerto No. 1 for Piano, Trumpet and Strings with Martin Helmchen conducted by Vladimir Jurowski. Paul was a Professor of Trumpet at the Royal College of Music from 1995–2011. He is currently a Professor of Trumpet at the Royal Academy of Music (2011–) and the Guildhall School of Music & Drama (1999–).