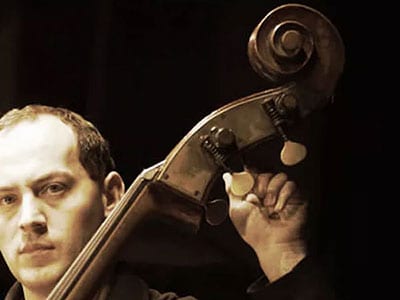 Yuri Goloubev was born in Moscow, Russia in 1972 where he studied classical bass and composition at the Moscow Tchaikovsky Conservatoire. In 2002 he became the youngest bass player in the history of both the USSR and Russia to be awarded the prestigious title of the “Honoured Artist of Russia” by President Putin and was featured in the international magazine “Harper’s Bazaar”.

From 1991 to 1992 Yuri performed with the Bolshoi Opera, and from 1992 until 2004 was Principal Bass with one of the world’s most noted chamber orchestras the “Moscow Soloists” directed by Yuri Bashmet. Here he collaborated with many top classical artists: Thomas Quasthoff, Lynn Harrell, James Galway, Gidon Kremer, Barbara Hendricks, Sviatoslav Richter, Mstislav Rostropovich, Vladimir Spivakov, Maxim Vengerov, and he has performed at many major concert halls throughout the world including Carnegie Hall and the Sydney Opera House.