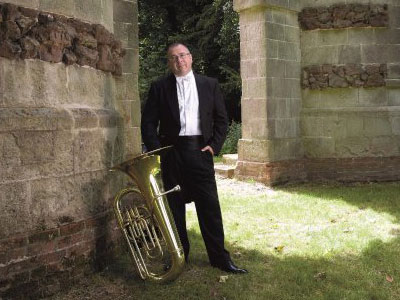 Born in South Wales in 1959, Andy was educated at Neath Boys Grammar School, where he initially played the cello before switching to the tuba. He was a member of the Glynneath Silver band and the NYOW, before studying at the RNCM with Stuart Roebuck. Whilst at the RNCM he played with the Halle as a guest, joined the CWS Manchester band and played with numerous brass bands. In 1980 Andy moved to Glasgow to join Scottish National Opera as principal tuba, where he had the opportunity to work with all of the Scottish orchestras and ensembles. In 1986 he joined the Bournemouth Symphony Orchestra as principal tuba, where he has remained to the present day. Andy has played as a guest with most of the professional orchestras in the country and works as a regular guest with the Chamber Orchestra of Europe. Andy feels lucky to have achieved a good balance between teaching and playing, having previously taught at Hordle House Prep School, tutored at NYBBGB and NYWOW; and holds the post of Professor of low brass (tuba and euphonium) at the Royal Marines School of Music in Portsmouth.