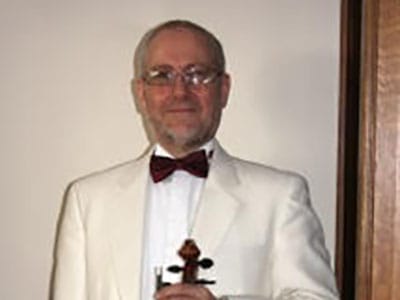 Edward took a degree in physics and electronic engineering at Manchester University and taught physics at a comprehensive school in London but musical life proved too strong so, after a short time studying violin with Mark Knight, he transferred his studies to Yfrah Neaman, professor of violin at the Guildhall School of Music and Drama. He came to Wells in 1974 as the Practice Supervisor, allowing him to carry on his violin studies with Yfrah. From here he began teaching at Wells Cathedral School and developed his freelance orchestral work. Over the years he has worked with the London Festival Ballet Company (now the English National Ballet), the Bejart Ballet, the National Ballet of Canada, and the New Symphony Orchestra.

In 1985 following a request from Wells Cathedral Organist, Dr.Crossland, he helped found the Wells Sinfonia which accompanied the Wells Oratorio Society and the Wells Cathedral Choir. Chamber music has played an important part too, and Edward has been involved with several string quartets in the West of England and Wales. This has resulted in performing with the Ceres Quartet in the BBC costume drama, “Respectable Trade” and appearances with Neil Innes of “Bonzo Dog Band” fame. His teaching at Wells continued alongside the post of Head of Strings at Westonbirt School followed by teaching at Clifton College and Richard Huish College, Taunton. Now, in addition to Wells, he is a visiting lecturer at Bath Spa University College. For the past 15 years he has been a tutor for the National Children’s Orchestra and is Senior String Tutor to the Somerset County Youth Orchestra. In addition, he also coaches the National Schools Symphony Orchestra. Edward has been an adjudicator for the “Chamber Music in Schools” competition for the past ten years, and has adjudicated for the Pembrokeshire Schools Music Festivals.