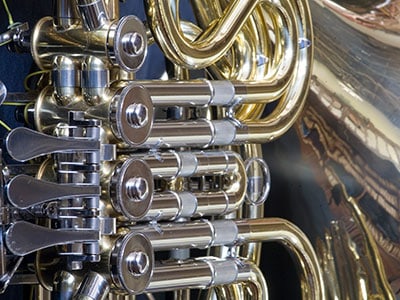 Edward Griffiths graduated from the Guildhall School of Music and Drama in 2013. He studied with Hugh Seenan, David Pyatt, Jeff Bryant, Richard Bissell, Jonathan Lipton and Chris Parkes. At the age of 16 he gained a place as a specialist musician at Wells Cathedral School, studying the French horn with Simon de Souza under the DfES scheme.

Ed frequently plays with many of the country’s leading orchestras including the London Symphony Orchestra, Bournemouth Symphony Orchestra and the Welsh National Opera where he is on trial for Co-Principal, 3rd horn. This has led him to perform in many great concert halls including the Royal Festival Hall, Barbican, Royal Opera House Muscat in Oman, Wales Millennium Centre, Wolkenturm Grafenegg and Wiener Konzerthaus. He has performed under many renowned conductors including Valery Gergiev, Sir Colin Davies, Simon Rattle, Michael Tilson Thomas and Carlo Rizzi, and played Strauss’ first horn concerto in Greenwich.

Ed is also a keen chamber musician and regularly performs with the Arnold Camerata and Quintessence Wind Quintet.
We use cookies to ensure that we give you the best experience on our website. If you continue to use this site we will assume that you are happy with it.OkPrivacy policy