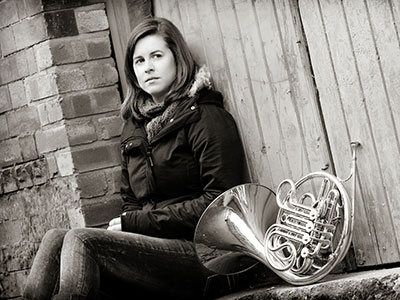 Elspeth Dutch was born in Colchester. She started to learn the violin when she was 6 years old but decided she wanted to learn another instrument too. She says “I liked brass instruments because they were loud and shiny” and after her mum found a local teacher, Simon de Souza (teacher of horn at Wells Cathedral School), she began to study the horn when she was 9 years old.

Elspeth studied with Simon until she went to the Guildhall School of Music and Drama where she studied with Richard Bissill, Hugh Seenan and Jeff Bryant. She was on trial for 1st horn at RLPO at the same time as her trial with CBSO during her last term at GSMD. She says “these trials were my first professional work along with a concert with the LSO playing offstage for about 6 bars!” As Principal Horn for The CBSO Elspeth’s highlights to-date include playing Ein Heldenleben at the Lucerne Festival with Simon Rattle as part of her trial – “a pretty special concert”. Photo Credit: www.paularthur.net