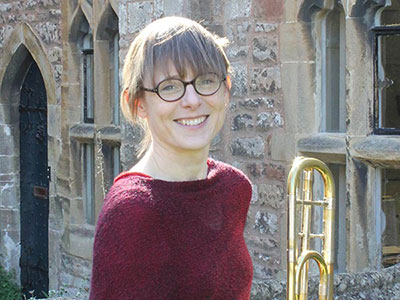 Emily White is professor of Sackbut and trombone at The Guildhall School of Music and Drama, sackbut and trombone tutor at The Royal Welsh College of Music and Drama, and trombone teacher at Wells Cathedral School. She enjoys both contemporary and early music, and works in both fields. She is a member of The English Cornett & Sackbut Ensemble (ECSE) whose fourteen discs include two Gramophone Award winning discs, a Diapason D’Or and Classic FM disc of the Month. ECSE regularly appear on BBC Radio 3’s live show In Tune, and their BBC Proms debut was 2012. Emily is in the trio Pandoras Box who have taken their improvisatory and cutting-edge approach to the trombone across UK, Europe and to the USA. Emily has played for productions with Shakespeare’s Globe Theatre since its opening in 1997, including tours to Chicago, Seoul, London West End and Barbados. Emily has played sackbut for Paul McCartney, appeared on Eastenders playing the trombone and performed sackbut in the Edinburgh International Festival with The Tiger Lilies. Emily plays principal trombone with the Italian ensemble Il Giardino Armonico, and appeared on the disc La Morte della Ragione, winner of Diapason d’Or de l’Année 2019. She is scheduled to tour three programmes of virtuosic 17th Century chamber music with them in 2021.

Emily freelances as principal trombone with groups such as Alte Musik Berlin, B Rock and Les Talens Lyrique. She plays baroque violin, having studied with Rachel Podger and Walter Reiter. She plays trombone and violin with In Echo, appearing on their fêted debut disc Music in a Cold Climate. She plays fiddle in The Brewery Band and Rachel Stott wrote the concerto Scylla and Charibdis for her. Emily studied trombone with Alan Hutt at Wells Cathedral School, then went on to study trombone and violin at The Royal Academy of Music, Guildhall School of Music and Drama and Trinity Laban.