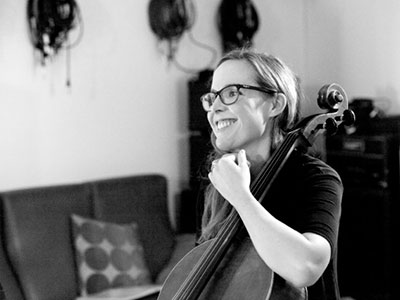 Harriet studied the cello with Ioan Davies as a specialist music scholar at Wells Cathedral School and then with Raphael Wallfisch and Susan Sheppard at the Guildhall School of Music where she received a distinction for performance. She remained at the Guildhall for a chamber music fellowship with her ensemble The Burney Players with whom she won several awards, including second prize in the Van Wassanaer competition and a Deutsche Bank Pyramid award. The group was also ensemble in residence at the Handel House Museum for two years. Harriet was principal cellist with the Southbank Sinfonia with whom she performed Walton’s cello concerto (conducted by Edward Gardner), gave the first public performance of a new work for solo cello by James Macmillan and chamber concerts at the Wigmore hall. She plays with many of the London based period instrument ensembles and modern orchestras, including the Royal Philharmonic Orchestra and the Orchestra of the Age of Enlightenment. Her playing has taken her all over Europe and she has performed on several live broadcasts, including BBC Radio 3’s ‘In Tune’. As a session musician, she has recorded with artists such as Sophie Ellis-Bexter, Paloma Faith and Florence and the Machine. Harriet also teaches the cello at Falkner House school in London and taught for several years at Godolphin and Latymer. She coaches the cello sections of the National Children’s Chamber Orchestra and South West Youth Orchestra. In addition, she writes reviews of cello music for Music Teacher magazine.