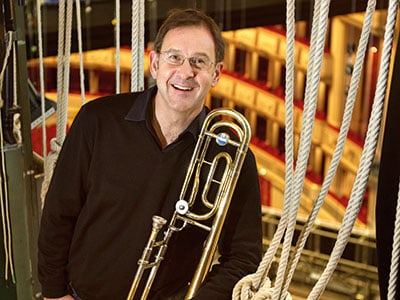 Ian Bousfield has been at the top of the profession for over one quarter of a century, excelling in perhaps more facets of the music business than any other trombonist to date. His career has included playing in two of the acknowledged top-four orchestras in the world, one of which is recognized as perhaps the greatest opera orchestra, performing as a soloist to the highest possible level with orchestras, brass bands and on period instruments, recording as a soloist on top labels, playing theme tracks to Hollywood blockbusters and teaching at the Royal Academy in London. He became Principal Trombone of the Halle Orchestra in 1983. After five years with the Halle, Ian replaced one of his life-long mentors, Denis Wick, as Principal Trombone of the London Symphony Orchestra in 1988, where he enjoyed a 12 year career. Ian became Principal Trombone of the Vienna Philharmonic and The Vienna State Opera – the first, and to date, only British member in the orchestra’s history. This appointment was followed shortly afterwards by his membership of the Vienna Hofkapelle Orchestra. Ian is currently Professor of Trombone at the Hochschule der Künste in Bern, Switzerland.