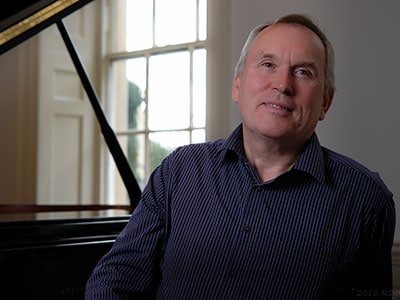 In addition to his work as Head of Keyboard at Wells Cathedral School, John Byrne is also Professor of Piano at the Royal College of Music in London. He won a scholarship to study at the Royal Northern College of Music with Marjorie Clementi and later became a pupil of Ruth Harte at the Royal Academy of Music where he won all the major prizes for pianists including the MacFarren Gold Medal.

Awards from the English Speaking Union, the French Government and the British Council then enabled him to work with Menahem Pressler of the Beaux Arts Trio in the USA, Vlado Perlemuter in Paris and with Vera Gournastaeva at the renowned Tchaikovsky Conservatoire in Moscow. Other awards at this time included scholarships from the governments of France, Italy, Germany, Hungary, Poland and Canada.

He has performed throughout the UK and in Western Europe, the USA and the Soviet Union. In addition to teaching, lecturing and adjudicating he has also worked as a Mentor for the Associated Board in the UK, Singapore and Hong Kong. He is a regular competition juror and also gives masterclasses – most recently in Dublin, Shanghai, Hong Kong and Singapore. His pupils have won numerous awards in national and international competitions.