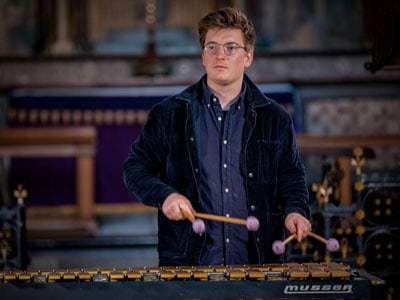 Jonny Mansfield is a percussionist (specialising in vibraphone) and composer. He has performed at many prestigious venues with respected musicians including Chris Potter, Gareth Lockrane, Stan Sulzmann and Yazz Ahmed. He has toured throughout Europe and performed at major venues such at the Bimhaus, Leipzig Jazzstage and the Royal Albert Hall.

In Summer 2019, Jonny released his debut album with his 11-piece ensemble ‘Elftet’ after completing a 14 date UK tour funded by the Arts Council. Jonny’s recordings have received extensive airplay and has been critically acclaimed worldwide.

Jonny was the recipient of the Tebbut Exhibition Award, Richard Turner Award, Scott Philbrick Jazz Scholarship and the Principals Award from the Royal Academy of Music. In 2018, Jonny was awarded the Kenny Wheeler Jazz Prize and subsequently signed to Edition Records to release his debut album featuring Chris Potter, Gareth Lockrane and Kit Downes. In 2020, Jonny completed his album in a day project – ‘Portrait’, where he composed, recorded, mixed and released an album within a day.

Jonny is also a founding member of Bonsai, who have released two albums and have toured extensively in Europe. Their most recent album was released in May 2019 on Ubuntu Music. As a composer, Jonny has been commissioned to write many works for his own projects and for other performers. Notably, he was commissioned by Marsden Jazz Festival to write an hour-long suite setting Simon Armitage (Poet Laureate) poems. This was recorded for a BBC 3 Jazz Now broadcast and has subsequently been nominated for an Ivors Award – ‘Best Large Ensemble Jazz Composition’. Jonny was nominated for the same award in 2020 for his composition ‘Present’ written for orchestra and vocalists. Jonny was commissioned to write a vibraphone and trombone duo for London Symphony Orchestra principals – Neil Percy and Peter Moore. This was premiered at LSO St. Lukes by Peter and Neil in 2019.

In 2014, Jonny attended the Reaching Out course at the Verbier Festival, Switzerland. The focus of this course was developing ideas on how engage new audiences as well as learning how to better communicate with all age ranges. From this course, Jonny has become a keen educator: delivering workshops and teaching all abilities across the UK.
Jonny has led workshops at Chetham’s School of Music, Aberdeen and Leicester Universities as well as being commissioned to write new works for their jazz ensembles. Jonny recently started teaching recently started teaching jazz vibraphone at Leeds College of Music.

“There’s something of a Mike Gibbs feel to Mansfield’s compositions with some Loose Tubes sensibility thrown in for good measure, but none of these allusions detract from the sheer originality his music exudes. A promise of magnificent things to follow.” – All About Jazz

“A musical vision beyond his years.” – Evan Parker