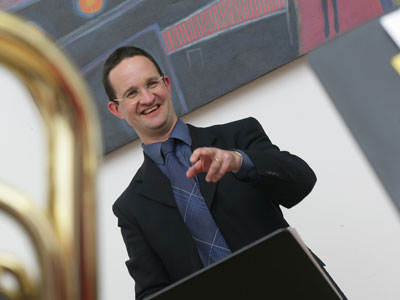 Kevin Price was born in Wellington New Zealand and studied at Otago University while working as a freelance musician with Auckland Philharmonia and New Zealand Symphony Orchestra. He moved to London after winning a three-year Associated Board Scholarship for postgraduate study at the Royal College of Music and the Royal Academy of Music. Kevin freelanced with London orchestras while studying from 1989-1991 and was subsequently appointed Principal Trombone of the Royal Liverpool Philharmonic Orchestra. This appointment led to trombone teaching position at the Royal Northern College of Music until 2005.

Kevin was appointed Head of Brass and Percussion Studies at RWCMD in September 2005. Kevin’s research into the bioscience of musical performance is financially supported by the Wellcome Trust and the Universities of Cardiff and South Wales, and is undertaken in collaboration with Dr Alan Watson of Cardiff University’s School of Biosciences. The research aims to provide a knowledge base and support for the Royal Society of Musicians, the Musicians’ Benevolent Fund and the British Association for Performing Arts Medicine in order to assist performing musicians to pursue active and healthy careers. Kevin currently examines at Wells Cathedral School, Birmingham Conservatoire and the Royal Northern College of Music, and is a Diploma examiner for the Associated Board of the Royal School of Music. He was made an Associate of the Royal Academy of Music in 2012.