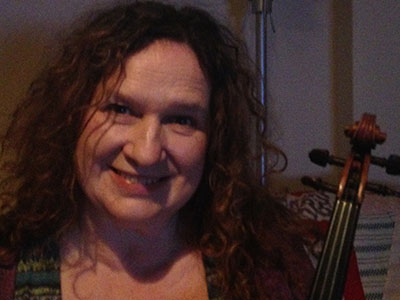 Liz was born and grew up in Somerset, where she began learning the violin and piano. She then went to London to study with Jaroslav Vanecek at the Royal College of Music, where she won prizes for both her violin playing and chamber music. After graduating from College Liz was appointed principal 1st violin with the Orchestra of Scottish Opera in Glasgow where she spent seven years, also appearing regularly with the BBC Scottish Symphony Orchestra and Scottish Ballet. Liz returned to London where she freelanced with many major orchestras including the BBC Symphony Orchestra, the Orchestra of the Royal Opera, the Royal Philharmonic Orchestra, English National Opera Orchestra and the Royal Ballet Sinfonia. She was also involved in some smaller groups including being the leader of European Chamber Opera. A few years ago Liz returned to Somerset and continued to freelance with appearances as assistant leader and principal second violin with the City of Birmingham Symphony Orchestra. She plays regularly with the BBC National Orchestra of Wales and Bournemouth Symphony Orchestra. Liz has enjoyed teaching both the violin and piano since she was 14 and now teaches at Wells Cathedral School, Clifton College and Churchill Academy and also is involved with Churchill Music!, who support an Introduction to Violin programme in Somerset schools. Liz has continued to enjoy chamber music throughout her career and appears as a guest with the Pump Room Trio in Bath.