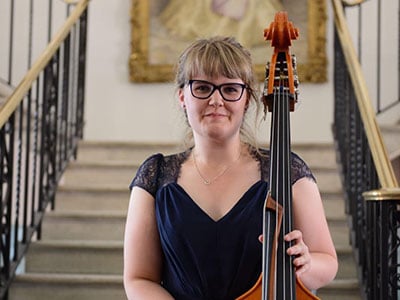 After starting her musical education by learning the violin and piano, Lucy began playing the double bass aged 11, and it quickly became her main instrument. At the end of her school career, Lucy received the Highest Mark for A-Level Music in Wales, gaining full marks for her performance examination.

In 2013, Lucy gained a place at the Royal College of Music in London, accepted as the only double bassist in her cohort. She studied under Caroline Emery and Tony Hougham, and also enjoyed tutelage by visiting professors Paul Ellison and Gabriele Ragghianti.

During her time at the Royal College of Music Lucy was a member of the RCM Symphony, Philharmonic and Baroque Orchestras, and played under the baton of such conductors as Bernard Haitink, Sir Roger Norrington, John Wilson and Vladimir Jurowski. She graduated in 2017.
Lucy was delighted to take up a place as a Graduate Music Assistant at Wells Cathedral School, and enjoyed a year working closely with the Strings department, tutoring and rehearsing its talented students.

Lucy lives in Cardiff and has continued her work in education at the Top Independent School in the UK by A-level results, Cardiff Sixth Form College.