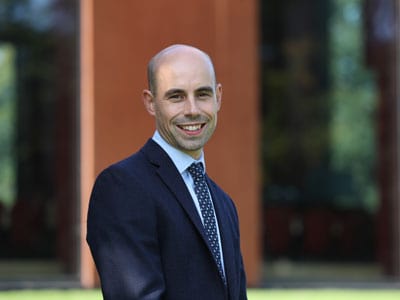 Mark White grew up in Somerset, later moving to Manchester where he studied Saxophone at the Royal Northern College of Music. Performances include the BBC Proms, Purcell Room, Bridgewater Hall, St Martin-in-the-Fields, with success at the Hattori Foundation, Tunnel Trust, and Park Lane Group leading to a number of UK and US tours. As an instrumental tutor, Mark has taught at the Royal Northern College of Music Junior School, Shrewsbury School and on the Benslow Music Course.

Mark is also an experienced media composer, with music published by Universal, Sony BMG, and placements across the BBC, ITV, Sky, Channel 4 and CBS. He has also gained credits working as an orchestrator on a number of feature films, as well as the ITV television series ‘Endeavour’.

As a respected producer, Mark has worked with a number of eminent Classical and Jazz musicians, producing recordings for a host of respected labels including Chandos.

Mark joined Wells Cathedral School in 2017, attracted by the wealth of talent and variety of musical activities, he feels privileged to work with passionate and inspiring students on a daily basis.