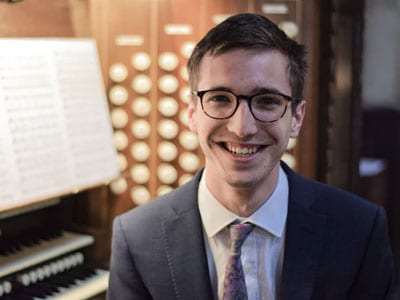 Matt Nicholls trained as an organist and choral conductor, has performed in the UK, Europe and China. He studied music at Cardiff University and the University of Cambridge. Matt is an award winning organist – he has appeared on Classic FM as well as giving recitals in concert halls such as St David’s Hall Cardiff, numerous British Cathedrals and is an Associate of the Royal College of Organists. As a choral conductor Matt has worked with choirs, both sacred and secular, for BBC Radio broadcasts as working with contemporary composers such as Paul Mealor, Cecilia McDowall and Howard Goodall, and with groups such as VOCES8 and Harmonia Sacra.

Matt is also a composer and arranger having had works performed by UK cathedral choirs and the BBC National Orchestra of Wales. Outside of his work on the music staff at Wells Cathedral School (Music Specialist School), Matt has a busy freelance career as an organ/piano/harpsichord accompanist for choirs, musical theatre shows and soloists, conductor of choral societies/ chamber choirs/ school music groups as well as having published articles on music education, choral music and community singing.

Matt is greatly looking forward to returning to the staff for the holiday schools in Easter, Summer 2022.