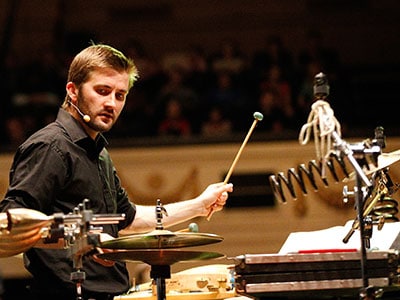 Owen graduated from the Royal College of Music in 2003 and then became a Junior Fellow from 2004-2006. Since, Owen has had an extremely varied career, appearing as a soloist with orchestras such as the BBC Symphony, BBC Concert, Melbourne Symphony, BBC Philharmonic, Philharmonia, Sinfonia Viva, Macedonian Symphony, Britten Sinfonia and London Sinfonietta. His performances have been broadcast on TV and radio all over Europe, USA, Japan, Australia and Mexico. In 2001, Owen formed the percussion duo, O Duo, who have released 2 albums to critical acclaim and have performed globally at the BBC Proms, Wigmore Hall, Lucerne Festival, Morelia Festival (Mexico), Harare Festival (Zimbabwe), Cheltenham Festival as well as performances in France, Spain, Bulgaria and Australia. Since 2007, the Duo have been Artistic Directors of Children’s Classic Concerts in Scotland performing regularly or presenting concerts with the Royal Scottish National Orchestra to an annual audience of 30,000 children.