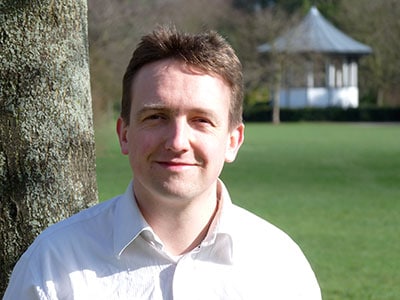 Paul Whitmarsh’s music has been performed at many festivals throughout the UK, including Aldeburgh, Spitalfields, Cheltenham, Deal, Hampstead and Highgate, Tête à Tête, the bmic Cutting Edge series, and the Park Lane Group New Year Series. Recent commissions include Lullaby for Choir and Organ magazine, premiered by the Joyful Company of Singers in 2010; Pealing Out, premiered by the Galliard Ensemble in 2009; and Berceuse in a Box for the 2007 Cheltenham Festival. His compositions have also been performed by, amongst others, Elizabeth Watts, Huw Watkins, David Campbell, Alexandra Wood, Daniel Becker, Chroma, and the Warehouse Ensemble. Much of Paul’s recent music is for chamber or vocal groups, with strong visual, literary or dramatic stimuli as starting points. Such pieces include I Still Can Sing for solo tenor and choir, commissioned by the 2008 Bath Bach Festival and premiered in Bath Abbey, and All These Confessions… for violin and piano, inspired by a set of screenprints by Patrick Caulfield and composed for the 2006 bmic Cutting Edge series. Paul read music at Clare College, Cambridge, before studying composition with Julian Anderson at the Royal College of Music. Music education is a huge passion, one that has its roots in three years as Composer-in-Residence at Bedford School between 2002 and 2005, and three subsequent years as Maingot Trust Fellow in New Music at The Warehouse, London. Paul currently teaches in the composition and academic music departments at the Guildhall School of Music and Drama and teaches composition at Wells Cathedral School.