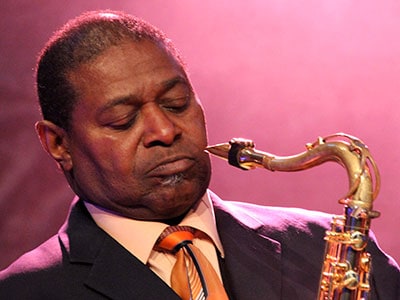 “Pee Wee makes the funk sound jazzy and jazz sound funky. Somehow he synthesises the two into one great music” – Peter Madsen The music legend, jazz saxophonist and funk master, Pee Wee Ellis will be joining us for an inspirational day during our international jazz week. Pee Wee’s remarkable musical life covers over 60 years in the industry. He moved to New York City at the age of 16 years to study at Manhattan School of Music under the expert tuition and one of the most widely recognised and influential jazz musicians, Sonny Rollins. At 19 he moved back to Florida as bandleader, musical director and writer. He later joined James Brown’s sensational Revue, playing alto sax and within six months he was musical director and co-writing with James. He introduced the dynamic arrangements and rhythms that would define the emerging language of funk. Many of Brown’s hits were attributed to Pee Wee. He went on to produce alongside a whole host of musicians including Brother Jack McDuff, Esther Phillips and George Benson. By 1979 he began a five year spell as Van Morrison’s musical director. He has also enjoyed a flourishing solo career releasing many jazz albums including the critically acclaimed ‘12 and More Blues’, ‘Live and Funky’ and ‘Yellin Blue’. His own band The Pee Wee Ellis Assembly consistently tour worldwide and he is constantly busy guesting with various artists, teaching and arranging and recording his own albums. In 2014 he received an honorary doctorate from Bath Spa University in recognition of his services to contemporary music. He continues to support local music as patron of the Bristol International Blues and Jazz Festival.