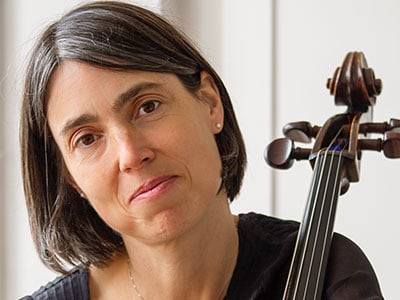 Penny Driver is one of the most respected teachers of specialist cellists in the UK. Her students frequently go on to win scholarships to the major conservatoires in London and Europe. Penny is regularly invited to give Performance Classes to undergraduate and Masters students at the Royal Academy of Music in London, examines at the Royal Conservatoire of Scotland, and for many years was Professor of Cello at Royal Welsh College of Music and Drama in Cardiff. Penny studied with Ralph Kirshbaum, whilst taking a degree in Russian at Cambridge University, and as a postgraduate at the Royal Northern College of Music. She was awarded a Countess of Munster scholarship to work with Marc Johnson of the Vermeer Quartet in the USA where she was a finalist in the Chicago Symphony Orchestra’s concerto competition. She completed her studies in Moscow with legendary Russian teacher Natalia Shakhovskaya. Penny combines her teaching with a versatile concert career. As a recitalist and chamber musician she has performed throughout the UK and in the USA. She has had a long association with the London Symphony Orchestra and also with the Orchestra of the Age of Enlightenment, performing all over the world with such conductors as Valery Gergiev, Sir Colin Davis and Sir Simon Rattle. Website: www.pennydriver.co.uk