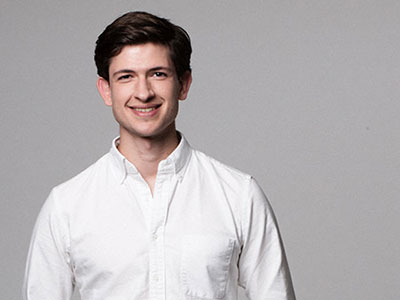 Robert began singing while at Wells Cathedral School under the tutelage of Laurence Whitehead, where he was actively involved in the Chamber Choir, Chapel Choir and Barbershop ensemble, and performed leading roles in the school’s musical theatre productions. After leaving in 2009, he continued his studies in London at the Guildhall School of Music and Drama with teachers Kate Paterson and Andrew Watts.

While at GSMD, he continued to sing with the Wellensian Consort, became a member of Genesis Sixteen, (The Sixteen’s professional training programme) and made his National Theatre debut as Peter in Jonathan Miller’s highly acclaimed stage production of Bach’s St. Matthew Passion.

Having graduated with first class honours in 2015, he worked as both an international soloist and consort singer with ensembles including the Sixteen, Britten Sinfonia Voices, English Chamber Orchestra, Edvard Grieg Kor and the recently Grammy-nominated Bergen Philharmonia Chorus. Robert currently studies with acclaimed baritone Russell Smythe.

In June 2016, Robert was appointed as the new baritone in the world-renowned a cappella group, VOCES8, with whom he currently enjoys a busy international touring and broadcasting schedule, performing in many of the world’s most prestigious concert halls and recording with Decca and Signum Classics.