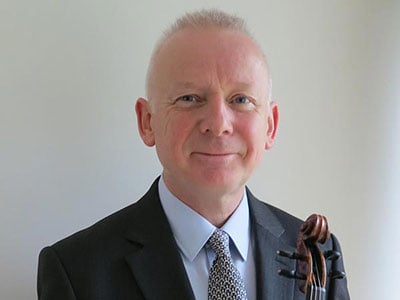 Robert Salter enjoys a varied and diverse performing career. After starting violin lessons aged eleven, he won full scholarships to study at Wells, and then with David Takeno at the Guildhall School of Music and Drama, where he was a founding member of the Guildhall Strings. As Leader/Director of the Guildhall Strings throughout its 25 year existence, Robert has given concerts in the most prestigious concert halls throughout the world (Carnegie, Musikverein Vienna, Konzerthaus Berlin, Wigmore, Barbican etc ) often a soloist.

The ensemble recorded extensively with both RCA Red Seal and Hyperion Records, and broadcast numerous times on radio and television both in the UK and abroad. Robert Salter has appeared as a guest Leader with orchestras including the English Chamber Orchestra, Scottish Chamber Orchestra, Orchestra of the Royal Opera House, English National Opera, Bournemouth Sinfonietta and City of London Sinfonia, and currently is the Leader of the Garsington Opera Orchestra.

As a chamber musician Robert has appeared with the Nash Ensemble and Hausmusik (with whom he recorded the Schubert octet) and continues to be invited as a guest principal by the Philharmonia and Royal Opera House orchestras, and by the Academy of St Martin in the Fields, of which he is a member. Robert Salter taught for a number of years at the Junior Royal Academy of Music, and continues teaching privately and at Wells.