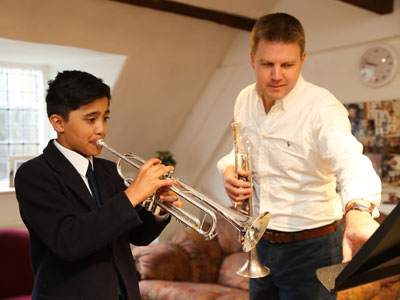 Ross Brown was a DfEE scholar at Wells, and continued studying trumpet at the Royal Academy of Music in London, where his professors included James Watson, Howard Snell, Paul Archibald and Robert Farley. While at the Academy he played with both the European Union Youth Orchestra and the European Union Baroque Orchestra.

Ross regularly performs and records with some of the world’s leading orchestras and ensembles, often as guest-principal trumpet, including The Academy of St Martin in the Fields, Britten Sinfonia, English Chamber Orchestra and the Bournemouth Symphony Orchestra. On period instruments he has performed with the Orchestra of the Age of Enlightenment, the Academy of Ancient Music, The Hanover Band & La Serenissima.

In addition to orchestral and period-instrument performances, he has collaborated with chamber musicians including Alison Balsom (trumpet), David Titterington (organ), Royal Philharmonic Orchestra Brass and BSO brass, as well as performing with the Lancier Brass quintet to win the Royal Overseas League chamber ensemble prize.

As principal trumpet with the London Chamber Orchestra, he has appeared as a soloist and has performed and recorded all over Europe, and regularly appears on TV and radio. His largest audience (an estimated 2 billion) was the live global broadcast of the Royal Wedding of TRH The Duke and Duchess of Cambridge in Westminster Abbey in April 2011.