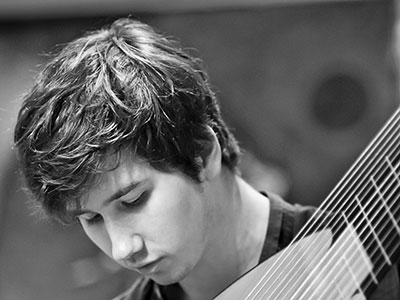 Born in Paris in 1988, Thomas Dunford discovered the lute at the age of 9 thanks to Claire Antonini, his first teacher. He finished his studies in 2006 at the Conservatoire de Paris (CRR), where he won a first prize unanimously in the class of Charles-Edouard Fantin. Thomas Dunford continues his studies at the Schola Cantorum in Basel with Hopkinson Smith, and participates in many master classes with lutenists such as Rolf Lislevand and Julian Bream, and at workshops with Eugène Ferré, Paul O’Dette, Pascale Boquet, Benjamin Perrot and Eduardo Eguez. He graduated in 2009.

From September 2003 to January 2005, Thomas made his debut playing the role of lutenist in Shakespeare’s Night of the Kings on the stage of the Comédie Française. Since then, Thomas has given recitals at Carnegie Hall and the Frick Collection in New York, at Wigmore Hall in London, at the Washington Kennedy Center, at the Vancouver Recital Society, at Cal Performances at Berkeley, at the Banff Center, at the Palau de la Musica in Barcelona. , at the festivals of Saintes, Utrecht, Maguelone, Froville, TAP Poitiers, Cologne WDR, Radio France Montpellier, Saffron Hall. He appears regularly as a soloist or ensemble in the most prestigious European festivals such as Ambronay, Arques Battle, Bozar, La Chaise-Dieu, Nantes, Saintes, Utrecht, and others. He also plays in England, Scotland, Ireland, Iceland, Italy, Spain, Germany, Austria, Norway, Belgium,

His first solo CD Lachrimae for the critically acclaimed French label Alpha in 2012 was awarded the 2013 Caecilia Award, BBC Magazine calling him the “Eric Clapton Lute”. His second CD “Labirinto d’Amore” was awarded the “Shock” by Classica.

Thomas Dunford is regularly invited to play with the ensembles A 2 Violes Esgales, Les Arts Florissants, Akademia, Amarillis, Les Ambassadeurs, Arcangelo, The Cappella Mediterranea, Capriccio Stravagante, The Baroque Music Center of Versailles, The Rhenish Chapel, Clematis, Collegium Vocale Gent, The Spiritual Concert, The Astrea Concert, The English Concert, The Baroque Ensemble of Limoges, La Fenice, The Folies Françoises, The Irish Baroque Orchestra, Marsyas, The Musicians of the Louvre, The Musicians of Paradise, The Musicians Saint-Julien, The Shadows, Pierre Robert, Pygmalion, The Fantastic Fantastic Madness, Scherzi Musicali, The Serenissima, The Siècles, The Scottish Chamber Orchestra, The Symphony of the Marais …