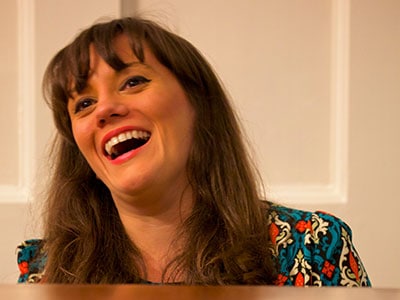 Vikki Stone is a multi-talented comedian, actress, singer and musician. Her shows are a unique mix of stand up and musical comedy and are typified by powerful vocals, sharp wit and clever songwriting skills – and silliness. Her first major show opened in 2011. Big Neon Letters played to sell-out audiences both in Edinburgh and London. Vicki left Wells as a talented flautist but has grown that extraordinary talent to develop new roles and new pathways for herself as a performer: she has never stood still. Vicki had, initially, set her heart on a career in musical theatre but has shown flexibility, adaptability and a “Can Do” approach to arrive somewhere different. The school motto esto quod es means ‘be what thou art’. The Greek poet Pindar said something similar – but in Greek – which could best be translated as “Develop the talents you were born with to become the best you can be”. Vicki is doing that to the full.