On Saturday 18 September, Wells Cathedral and Wells Cathedral School hosted a fabulous, free ‘behind the scenes’ day, during which children were able to experience the life of a Cathedral Chorister.

Thirty girls and boys, aged between seven and nine, came from schools across Somerset and beyond for the annual Be a Chorister for a Day event where they met the Cathedral Choristers and participated in fun singing workshops.

The day culminated in singing Choral Evensong in the Quire of the Cathedral with the award-winning and world-renowned Choir. The children performed the Anthem The Lord is my Shepherd by Howard Goodall, helped the Choir lead the two hymns in the service, and learnt to process in and out.

There were also events for the children’s parents, including a tour of Wells Cathedral School and tea in the historic Vicars’ Hall.

If you are interested in the 2022 Be a Chorister for a Day event, please contact the Cathedral Music Office via [email protected]. If you can’t wait that long you may like to join Wells Cathedral Song Squad, the Cathedral’s un-auditioned choir for children aged 7-13, or Wells Cathedral Song Squad Minis, for children aged 4-6, which meet on Tuesday afternoons during term time. Contact Naomi MacLeod-Jones via [email protected] for more details.

Wells Cathedral Choir was hailed by an international jury from Gramophone Magazine as the greatest choir with children in the world. The choir celebrated its 1100th birthday in 2009: boys first sang at Wells Cathedral in 909 and the full choral tradition dates back over 800 years. In 1994 the choral foundation at Wells was enriched by the addition of Girl Choristers. Today the choir consists of 18 Boy Choristers, 18 Girl Choristers and 12 Vicars Choral (the men of the choir).

The Choir is at the heart of the worshipping life of the Cathedral, and sings a wide repertoire of music ranging from the Renaissance period to the present day. It sings throughout the cathedral’s new music wells festival, which launched in June 2008, giving a number of premieres as well as featuring music from the previous forty years. The choir has premiered works from some of today’s finest composers, including Judith Bingham, Geoffrey Burgon, Bob Chilcott, Jonathan Dove, Gabriel Jackson, John Joubert, Sir James MacMillan CBE, Sir Peter Maxwell Davies CH CBE (former Master of the Queen’s Music), Tarik O’Regan, John Rutter, Howard Skempton, Sir John Tavener, and Judith Weir CBE (Master of the Queen’s Music).

Wells Cathedral Choir broadcasts regularly on BBC Radio 3 and its innovative recordings over the last eleven years for Hyperion Records and Regent Records have won international praise: “wonderfully blended, and must rank as one of the top cathedral sounds outside London” (BBC Music Magazine); “currently enjoying a superb top line” (The Observer), and has had two discs made Editor’s Choice in Gramophone Magazine which called the choir “probably the finest English cathedral choir at the moment” in “world-class form”.

As well as the liturgical musical repertoire the choir performs larger scale choral works in concert, with recent collaborations including the BBC National Orchestra of Wales (Britten War Requiem), Jools Holland and his band (Jools Holland Mass), Wells Cathedral Oratorio Society (Britten St Nicolas and War Requiem), Aled Jones, Dame Felicity Lott, Dame Emma Kirkby, James Bowman CBE, and Wells Cathedral School Chamber Orchestra (at royal gala concerts at the Royal Opera House, Covent Garden, and St James’s Palace, London). In September 2014 the choristers sang with the Berlin Radio Choir and the Berlin Philharmonic Orchestra under the baton of Sir Simon Rattle OM, in a performance of Bach’s St Matthew Passion at the BBC Proms. Shortly afterwards they sang with The Script on the ITV Pride of Britain awards, which was screened to an audience of five million viewers. They have recently recorded for the soundtracks of two films with scores by composer David Buckley, most recently Greenland which was released in late 2020. 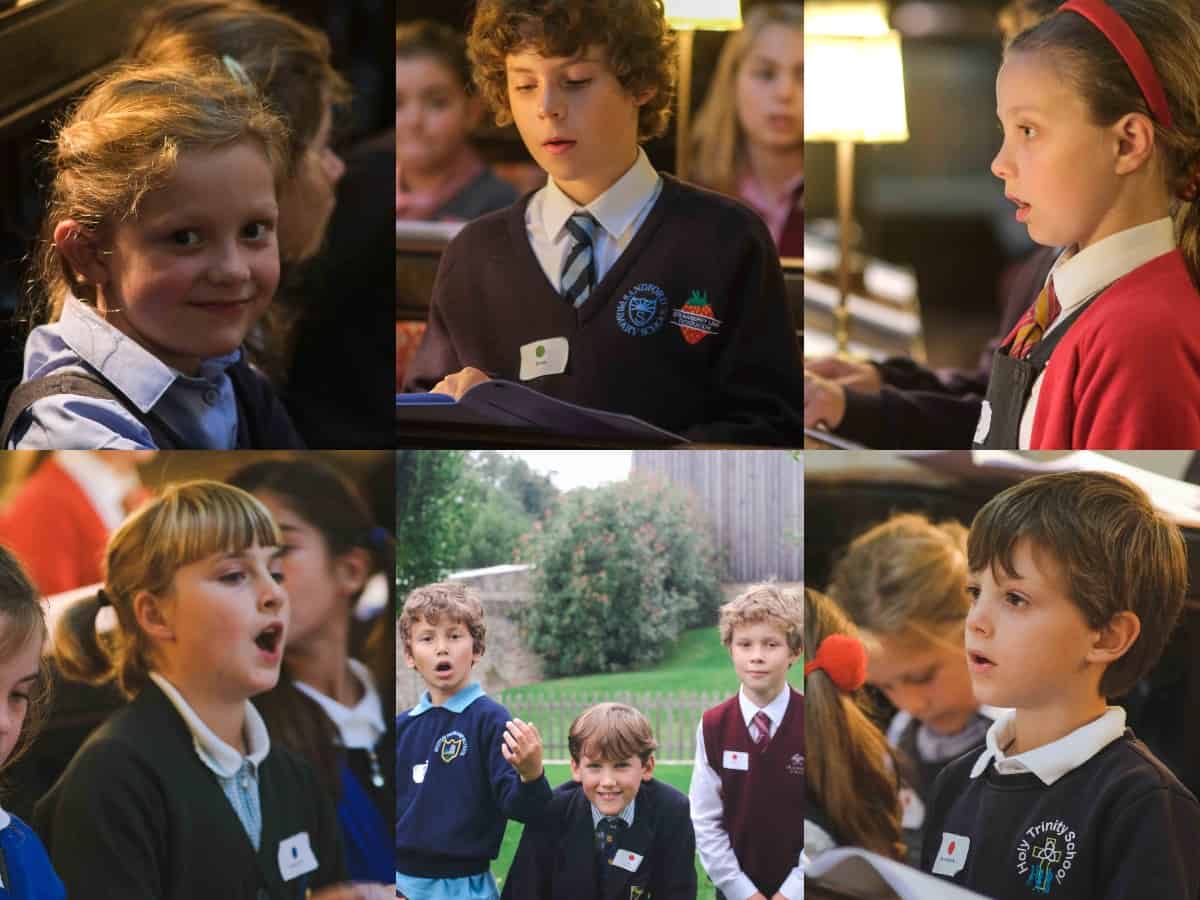