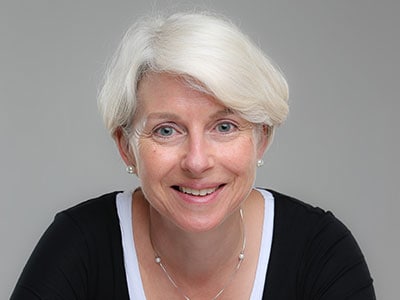 Born and brought up in Scotland, Liz Fyfe read Natural Sciences at Fitzwilliam College, Cambridge and was also one of their first Instrumental Scholars. She continued her studies at the Guildhall in London as a Sir James Caird Scholar, where she was awarded an Orchestral Wind Prize. During this time she was also a member of the European Youth Orchestra. On leaving the Guildhall, Elizabeth returned to her native Scotland as principal oboe of the Scottish Opera Orchestra where she worked for several years before moving back to London. Here she led a varied musical life working, recording and touring with all the major symphony orchestras and chamber groups. She has always had a special interest in playing the cor anglais, and was delighted to become principal cor with the Royal Opera House Orchestra in 1990. This was a wonderful time playing for such conductors as Bernard Haitink, George Solti, Claudio Abbado and Simon Rattle, performing, recording and broadcasting regularly. Although she left the ROH orchestra as a full time member in 1999 she continues to freelance there. She now lives in Marlborough, has four children, enjoys teaching at Wells Cathedral School, giving masterclasses, examining, adjudicating, freelancing as a player and being involved with education projects.