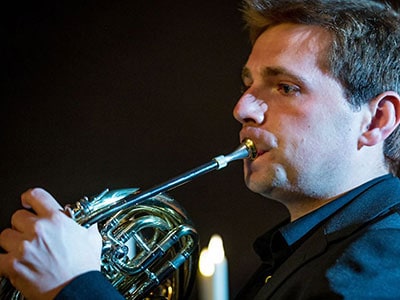 Tim Thorpe studied at The Guildhall School of Music and Drama where he studied for two years with Hugh Seenan. In 2004 Tim joined the Philharmonia Orchestra as third horn and just over a year later he was appointed Principal Horn of The BBC National Orchestra of Wales. In 2002 Tim was the UK finalist in the Paxman International Horn Competition and in 2004 he won the Royal Overseas League award for Wind and Percussion, and the Philip Jones Memorial Prize for an outstanding brass player. Tim has played with all the major London orchestras and also enjoys chamber music. He has performed with many ensembles including The London Sinfonietta and The Nash Ensemble. He has given solo performances at The Royal Festival Hall, The Queen Elizabeth Hall and The Purcell Room.