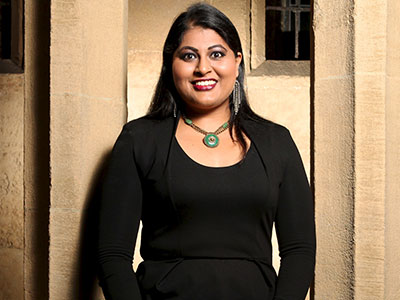 British soprano Meeta Raval is a rising star among the world’s new generation of lyric spinto singers. Barely in her thirties, Meeta Raval has won critical acclaim for her confident and emotionally profound interpretation of operatic title roles, as well as her solo recital performances in major concert venues throughout the UK, Italy and Canada. Meeta Raval’s singing career began at Wells Cathedral School, where she became one of the UK’s first Cathedral Girl Choristers. While an opera student at the Royal Academy of Music, she sang the role of the Countess in Le Nozze di Figaro in a production conducted by the great late Sir Colin Davis and directed by John Copley, one of the world’s premier opera directors. After graduating with honours from the Guildhall School of Music and Drama and the Royal Academy of music Meeta joined the prestigious National Opera Studio in 2009. With British Youth Opera Meeta sang Magda in Puccini’s La Rondine. For this performance, she was awarded the inaugural Basil Turner Prize by Dame Felicity Lott, and was praised as being ‘outstanding both vocally and professionally.’ Critics hailed Meeta as a ‘confident stage performer’ whose ‘bright, focussed, generous voice’ mesmerised audiences. In 2012, Meeta took to the stage as Cio Cio San in Anthony Minghella’s production of Madama Butterfly at the English National Opera and sang Donna Anna in Opera North’s Don Giovanni. In 2013, Meeta performed the solo soprano in Verdi’s Requiem at the Sage Gateshead, Newcastle. This same year, she made her recital debut at London’s Barbican Hall with a Puccini Gala and sang at the Royal Festival Hall, Birmingham Symphony Hall and Manchester Bridgewater Hall in a series of ‘Simply Gershwin’ recitals with the London and Manchester Concert Orchestras. Meeta’s many accolades include becoming a world finalist at the BBC Cardiff Singer of the World 2011, and winning the Dame Eva Turner Prize for “a soprano with dramatic potential”. She was the inaugural prize-winner of the Royal Academy of Music Pavarotti Prize. She was also the recipient of the Independent Opera Award and was awarded The Sybill Tutton Opera Award and Maidment Scholarship by the Musician’s Benevolent Fund. Most recently in 2012, Meeta was honoured to be named Patron of the Wells Cathedral Chorister Trust. Meeta’s other operatic roles include Lisa and Ortlinda for Opera North, First Flower Maiden for the English National Opera, Micaela in Banff, Canada, Teresa in Montepulciano, Italy, Die Knusperhexe and Amaranta for Royal Academy Opera On the concert stage, Meeta’s repertoire cover Bach’s Mass in B Minor and Johannes Passion, Brahms’s Ein Deutsches Requiem, Bruckner Te deum, Dvořák Stabat Mater, Strauss’s Vier Letze Lieder, Wagner’s Wesendonck Lieder and Verdi’s Requiem. In 2007, Meeta performed Jonathan Harvey’s Song Offerings conducted by Dominic Wheeler in a recital in association with the South Bank Centre to mark Messiaen’s centenary Meeta has appeared in numerous television and radio broadcasts. Her most recent television appearance was her performance of Mozart’s ‘Dové Sono’ (Le Nozze di Figaro) on BBC 2 in Howard Goodall’s History of Music. For BBC Radio 3 she sang Contessa in Discovering Figaro and for RAI, Teresa in Das Wundertheater. Meeta sang in masterclasses with Mirella Freni at the Solti Accademia di Bel Canto, Italy. She has also been coached by Dame Anne Evans, Rosalind Plowright, John Copley, José Cura, Graham Johnson and Dame Ann Murray. On the stage, Meeta has been performed alongside opera heavy weights Sir Thomas Allen Sir John Tomlinson . Meeta will have a busy performance diary over the coming year. She will sing Schoenberg’s Gurrelider at the Glive Concert Hall in April and Toni Castell’s Opera from Light to Life in August 2014. Concert appearances will include a recital at the Watts Gallery, an Opera Gala marking the debut of New Georgian Opera and a UK concert tour of “simply Gershwin” with the final concert held at the Royal Festival Hall. Meeta is currently covers the title role of Manon Lescaut at Welsh National Opera.